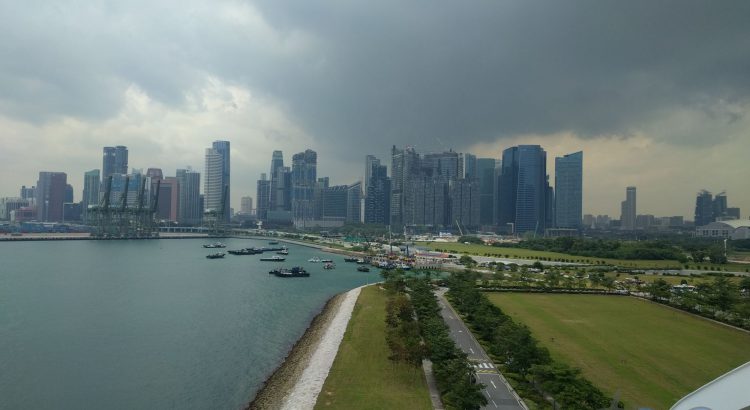 We had breakfast in the club lounge again. Our plans for the day weren’t very well defined. We were just planning to explore some of the shopping centers around the hotel in the morning.

We walked through 3-4 malls. It’s very interesting the way all the shopping is set up. You have mall after mall right next to each other on both sides of Orchard Road. Many of the malls even have the same stores. There are also several Michelin starred restaurants in the mall. After seeing a few of these and all the high end stuff we could never afford, we were pretty shopped out. We did make one final stop though.

The ION mall has a sort of secret observation deck. It’s free to go up, but the hours are very limited.  You have to go up to the 4th floor of the mall, and head towards the art gallery.  Tucked inside of the gallery are elevators up to the observation deck.  Luckily, they had a valentines day promo going on with extended hours. It was a great view of the entire city (and country) of Singapore.


We then checked-out and took a cab to the port. Embarkation in Singapore has to have been one of the most painless ever. Even with two ships in port, there was absolutely no waiting anywhere. We were on board the ship about 10 minutes after arriving at the port. As soon as we got to the cabin, our bags arrived. Nothing but great things to say here.

We were in a balcony cabin on the port side towards the front of the Baja deck.  I thought the location of the cabin was very convenient to everything; although, it was a bit rougher here than other parts of the ship.  There was not anything remarkable about the cabin – just your standard cruise ship cabin.

We spent the afternoon exploring the ship, reading for a while, and unpacking. Then it was time for the muster drill which was painless. Just as we were about to set sail, a giant tropical rain storm moved in. It was absolutely pouring rain. Eventually the rain let up and we were able to set sail.

We then headed off to dinner.  We signed up for late traditional dining as we prefer to have the same waiters and a set schedule for dinner.  Interestingly, we had one of only a few assigned tables in the Vivaldi dining room while everyone else was in anytime dining.  We found our table for two and met our waiters, Korrapat and Ashwin.  Immediately, we knew we were in for a great dining experience the rest of the cruise.

The show this evening was the welcome aboard show which consisted of a few numbers by the orchestra, singers, and dancers as well as a brief show by a fly-on entertainer who specializes in classic rat-pack songs. Both were something to look forward to later on in the cruise.

One thought to “Singapore – Orchard Road and Diamond Princess Boarding”