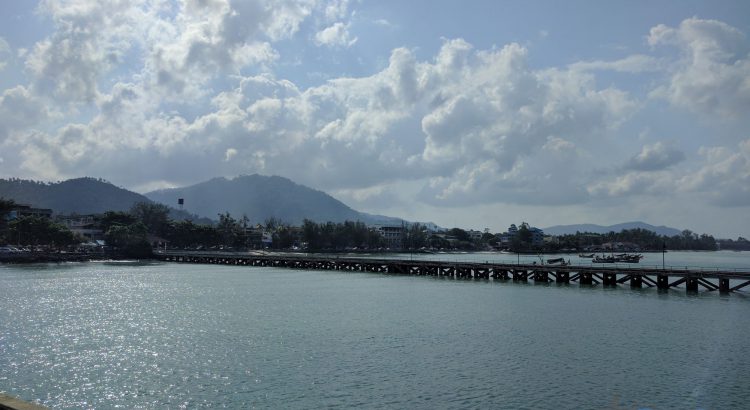 We got up early so we could be on one of the earliest tenders possible. After getting breakfast, we went down to the dining room where they were handing out tickets and ended up on tender #1. Our tour for the day was a 4×4 tour of the island through Tours Ko Samui. The 4×4 was a truck with seats in the bed.

We found our driver without any problems. There was supposed to be 6 people on our tour which was a welcome change from the the crowded ship tours. Another couple came about 30 minutes after we arrived. After waiting about an hour and a half, the other lady on the tour decided to go tell the guides that enough is enough and it is time to go. We never found out why the other people never showed up.  It was frustrating and also a bit bizarre given that you had to put down a half payment to book the tour.

Our first stop was at an elephant trek through the jungle.  I went back and forth on whether we should support this kind of business.  I know some may say its inhumane, but it was something you can only do in this part of the world.  I also chose a tour specifically that noted that the elephant trek they used was the most humane on the island.  Although I do not have a lot to compare it to, it did seem that they treated the elephants well, giving them periodic baths to cool off, allowing them to rest between rides, and not using the elephant hooks. It was a wonderful, although harrowing experience.  The seat seemed like it could fall off at any time.  Sam even slid down off the seat and rode on the neck of the elephant.

Next we went to a monkey demonstration where they showed how they trained monkeys to climb trees and retrieve coconuts. We were also goaded into trying some fresh coconut milk. Against our better sanitary judgement we tried it and it was very tasty.

Our next stop was at a temple with a mummified monk.  According to legend, the monk died, but never decayed.  So they built a temple.  It was interesting, and pretty weird at the same time.

We made a quick stop at a waterfall for pictures.

We then began the climb up the mountain. The road was quite rough but we eventually made it up to a restaurant with sweeping views and local Thai food.

After lunch, we began our climb up to the top of the mountain. Our guide told us, “this is where it gets rough.” Understatement of the trip. It was continuous potholes, ruts, and broken roads. I had to hold on with all my strength because our guide laughed at us when asked about seat belts saying, “This is Thailand, no seat belts.” I do not think the other lady on the tour with us was too impressed.

When we eventually got to the top, it was definitely worth it. There was a huge Buddha on the top of the mountain with 360 degree view of the entire island.

Then it was time to head back down. The road down was much better. We made a stop at the grandfather and grandmother rocks. I think the pictures explain the names.

Then it was back to the port. We were thinking there would be beach time but the long wait for people meant that was not possible.  Despite not stopping at the beach, this tour was definitely the highlight of the trip.  It was a fabulous tour and we would unquestionably recommend the tour.  There was no wait for tenders, so we got on the first tender available and were back on the ship in no time.

This evening was our second formal night. We took some more pictures and then went to dinner.

The show this evening was a violinist who I thought was very good.  After the show, we went to the balloon drop.