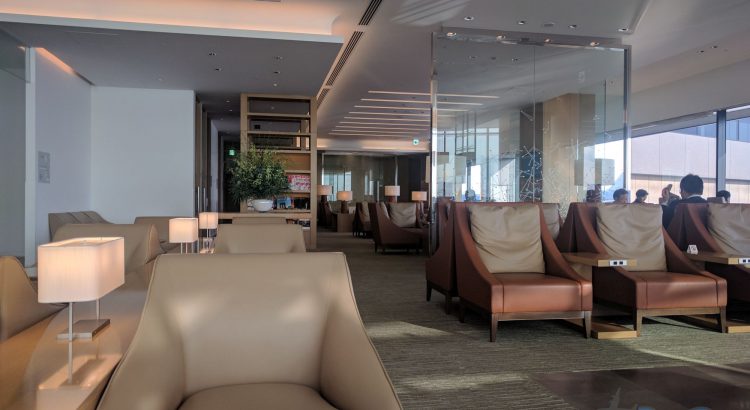 Our flight was one of the first arriving in Narita in the morning.  We went through transit security and there was no one there.  We were basically the only people transiting Narita from our flight.

We arrived at the lounge just as they were opening up for the day. We were there at about 6:30 and although the sign said the opening time was 7:30, we were allowed in. No food was setup yet and nothing (including showers) was available until the actual lounge opening time of 7:30.

Once they opened up, we both took showers which were well appointed with hairdryers, towels, and pump bottle amenities. A shower after a red eye and before another long flight is very refreshing.

After our showers, we headed up to the dining area which was very crowded. We eventually found a table. They had both Western and Japanese options for breakfast. I opted for the Japanese option of Beef curry with Miso soup given the lackluster offering on the flight.  It was very good. Samantha had the Western option of Scrambled eggs and sausage which she said was better than the flight.  They also had these cool beer machines that pour the perfect beer every time. I obviously had to try it out.

After brunch, we went back downstairs and found some seats by the window to nap and read before our final flight.